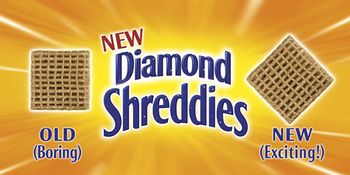 Now with 45 more degrees!
Drone: But your highness, she's a commoner! Her Slurm will taste foul!
Hive Queen: Yes! Which is why we'll market it as New Slurm! Then, when everyone hates it, we'll bring back Slurm Classic and make BILLIONS!
— Futurama
Advertisement:

Weasel Words which attempt to give the impression of radical improvement in the quality or performance of a product which might not actually be there. In fact, US government regulations require only that there be a small functional change in a product or its packaging to qualify it to use this description. Thus, changing the design for the spout on a box of detergent would allow the manufacturer to tout it as being "new and improved". Changing the quantity of the product can also be a "new and improved" change, even if the change isn't in the direction that would qualify as an "improvement" for anyone except the manufacturer's accountants. Your favorite cereal might become "new and improved" when they increase the size of the box but decrease the amount of cereal in the box. Your favorite shampoo might become "new and improved" when they add a strong fragrance that makes your hair smell awful — or, worse, makes you sneeze.

A favorite trick of manufacturers is to "improve" an item by adding "botanical" ingredients. This is generally done by putting a handful of herbs into a strainer, then dipping the strainer into a 500-gallon vat of hot water for a minute or two. Two drops of the water is then added to every bottle of the product, which is then priced fifty cents higher than it used to be.

Comedian George Carlin observed that the phrase is perfectly meaningless in the first place. Which is it, a new product, or an old one which has been improved? Logically it cannot be both "new" and "improved"...

If the ad is specific about what they improved, it's We Don't Suck Anymore. If the ad emphasizes that the product is still the same despite a change in its packaging, it's New Look, Same Great Taste!. May be related to Absolute Comparative if the ad isn't specific about what makes the new product better. See also The New Adventures for this trend in media.