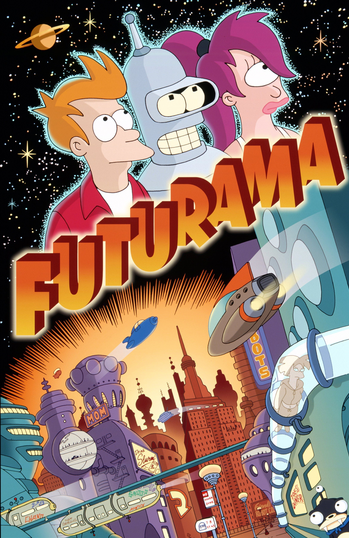 "Bite my shiny metal ASS!"
"Welcome to the world of tomorrow!!"
Advertisement:

Created by Matt Groening, this Fantastic Comedy of an Animated Series follows the life of Philip J. Fry: Right as the clock strikes midnight on December 31, 1999, Fry — a pizza delivery boy in New York City — falls into a cryogenic tank and gets frozen for a thousand years. He emerges from his cryo-nap in the morning of December 31, 2999 to find a world of space travel, robots, aliens, mutants, and a buttload of new technology. After making friends with a suicidal hedonistic robot and a buxom cyclops, Fry tracks down his distant relative — Professor Farnsworth, an elderly Mad Scientist and Fry's great-great-something-nephew — and becomes a delivery boy for Farnsworth's package delivery business, which allows him to have all kinds of adventures.

Upon its release, many people expected "The Simpsons in SPACE!" but the show proved those fears unfounded soon enough. It also started as a Fish out of Temporal Water series, but as Fry got used to everything (which didn't take long), it became an ensemble comedy set in the future. (Fry still regularly needs strange futuristic concepts explained to him, though.)

Futurama has a well-established canon — which plays into numerous episodes at times — and the occasional dramatic moment hidden amidst the comedy. Episodes notable for such moments include "Roswell That Ends Well," "The Why of Fry," "The Sting," "Luck of the Fryrish," "Jurassic Bark" (whose Downer Ending had the producers getting hate mail from viewers who had cried), and "The Prisoner of Benda" (which invented a new mathematical theorem for brain switching).

A large portion of the original writing staff, all of whom had college-level educations, left all potential breaks from reality up to the Rule of Funny and inserted numerous mathematical, engineering, and scientific jokes (ranging from subtle to extremely obscure) into the show.

The show's original run on Fox lasted from 1999 to 2003; the network cited disappointing ratings as the reason for its cancellation, but the creative staff cited its poor timeslot. After years of being kept on life support by Adult Swim, the show returned with four direct-to-DVD movies released between 2007 and 2009 (later syndicated as a sixteen-episode "fifth season,") then Comedy Central properly Uncanceled the series in 2010 after ratings improved in syndication. note So, references to "Season 6" on this page refer to the 2010 season, even though the DVD releases and Netflix label it "Season 5."

Futurama has a Best Episode Crowner

. Tropes related to the Futurama comic book series by Bongo Comics have their own page. See here for the Episode List.

On April 22, 2013, it was announced that the season being aired at the time (7 in production, 10 in broadcast) would be Futurama's last, and the final episode aired on September 4. After a 2014 crossover with The Simpsons, titled "Simpsorama", the show returned in September 2017 for a one-off double length audio drama on the Nerdist Podcast called "Radiorama" to promote the mobile game Futurama: Worlds of Tomorrow. In 2022, it was announced the series had been Un-Cancelled again for a 20-episode revival on Hulu.

"Farewell from the world of tomorrow!!"
Feedback