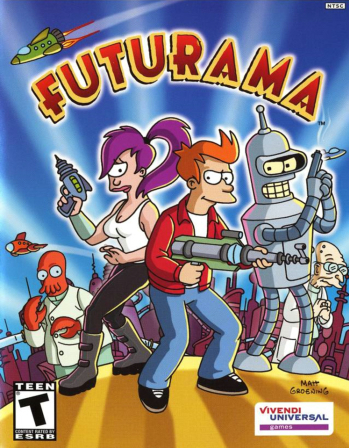 You're a playable character!
Advertisement:

Futurama: The Game is a 3D Platform Game/Third-Person Shooter created by Unique Development Studios, for PlayStation 2 and Xbox, released in August 2003.

The story, written by J. Stewart Burns of the TV series, opens with Professor Farnsworth informing the Planet Express crew that, due to his poor business plan and their incompetence, he's had to sell the company to Mom. This immediately backfires when Mom, now owning 51% of Earth, is declared its supreme ruler, and promptly enslaves humanity. Now the crew must escape into space and find a way to undo the Professor's mistake.

The game was considered in continuity since it was written by David X. Cohen, the show's lead writer, though with the revival of the show it was probably rendered non-canonical for obvious reasons.

The cutscenes from the game (with all references to the work being a video game omitted) were later edited together into an DVD bonus feature on the Futurama movie The Beast With a Billion Backs, entitled "The Lost Adventure".

Futurama: The Game contains examples of: