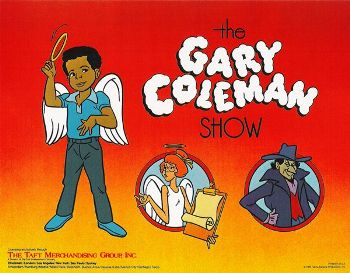 No, this isn't a sketch or talk show, despite what the title suggests.

In an Animated Adaptation of the Made-for-TV Movie The Kid With The Broken Halo, Gary Coleman stars as an apprentice angel named Andy LeBeau. Once an Episode, he has to go help one or more unfortunate children on Earth solve their problems. With each mission, though, the villainous Hornswoggle would always try to sabotage Andy by tricking him into making the wrong choices, and Andy would have to fix them by the end.

Hanna-Barbera produced the show for NBC. If this cartoon was ran in first run in 1982 and then it was rerun on Cartoon Network, it's definitely harder to watch now with the main character being an angel and Gary Coleman actually having died.