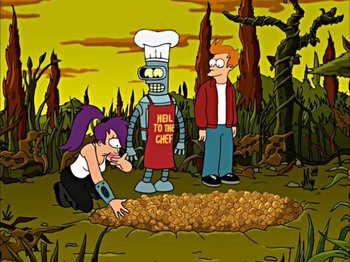 The Problem With Popplers.
The crew discovers an irresistible source of food on a distant planet, and brings it back to Earth to be sold at the Fishy Joe's restaurant chain. The new food becomes a global phenomenom. But when it's discovered that the so-called "Popplers" are actually Omicronian babies, the Omicronians demand recompense — in the form of a live TV special in which Leela is eaten.