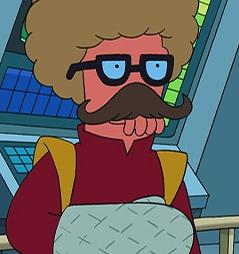 Bob Ross lives!
"Hello, friends. I am a perfectly normal human worm-baby. You have nothing, absolutely nothing, to fear from me. Just pay no attention to me and we'll get along just fine."
— Invader Zim

Someone has gotten duplicated/taken over/impersonated by something not human, and the duplicate is trying to pass as them. But they do a terrible job of it; acting in an erratic manner, forgetting names, walking stiffly, and talking in an odd dialect. They might as well call themselves "Hugh Mann" and walk around with a name-tag reading "I'm Most Definitely Not A Space Alien" — it would make for about as convincing a disguise.

Luckily for them, nobody notices at all. Or at least nobody anyone will listen to. Sometimes, it helps that the character that's being impersonated normally acts this way. Almost always Played for Laughs, and often results in characters Failing a Spot Check, Comically Missing the Point or asking Did You Get a New Haircut?

A Sub-Trope to Human Disguise.

See also Clark Kenting and Paper-Thin Disguise. Compare Bad "Bad Acting", and Out-of-Character Alert. May overlap with They Look Like Us Now for further laughs. Not to be confused with The Funday Pawpet Show character Hugh Manatee.