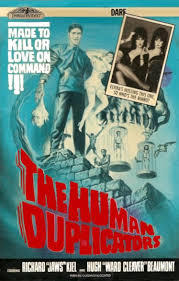 The Human Duplicators is a low-budget film released in 1965 by independent company Woolner Brothers Pictures Inc.

The plot involves a giant alien named Dr. Kolos (Richard Kiel) who is dispatched to Earth from a faraway galaxy on orders to create android doppelgängers by employing the scientific services of hypnotized cyberneticist Prof. Vaughn Dornheimer (George Macready).

The Human Duplicators provides examples of the following tropes: