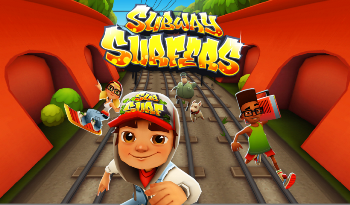 Most of the game actually takes place above ground. Though there is a gratuitous amount of train surfing nonetheless. note  From left to right: Tricky, Jake, the Inspector, Fresh
Advertisement:

is a real (and dangerous) activity. is an Endless Running Game made by Kiloo & SYBO Games for the iOS and Android, released in 2012. In it, you play a young delinquent caught vandalizing, and you must evade the Inspector and his dog using Le Parkour as they chase you through the train tracks of your city. In 2013 the game was updated to go on World Tour, traveling to various world locations.

Tropes applying to the game include: