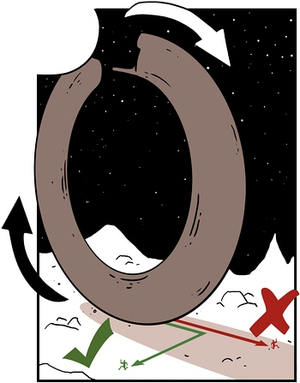 The Prometheus School of Running Away From Things is best skipped.
Azusa: Wait! Why are we running away in a straight line!?
Karina: Oh, right! [steers the M3 to the side]
— Girls und Panzer der Film
Advertisement:

Logically, the fastest way to avoid something dangerous that's stuck on a straight course is to move a few steps aside of its path and let it pass by, but in fiction nobody ever seems to do this. At all.

So like a flightless version of Acrophobic Bird, characters being chased by a car, falling rocks, or anything else that travels in one direction will inevitably run straight ahead and try to outrun the threat. They appear to only be able to think in one dimension—escaping that oncoming freight train by jumping off the track just doesn't occur to them.

This looks very dramatic on camera, but Fridge Logic kicks in a little while later and you ask "Well, why didn't she enter one of the buildings instead of letting the car chase her down the freeway?"

Note that this doesn't apply when there's an actual reason that the character can't simply leap to the side: Maybe that car is cruising down a narrow alley where there is no "sideways" for the runner to go, that boulder is rolling down a tunnel with no sidepaths, or those railroad tracks are currently crossing a bridge over a hundred-foot canyon. (These highly specific examples are highly specific because they're some of the few times there's ever been a good justification for outrunning the danger.)

Truth in Television: In nature, most threats coming towards you would be a predator of some sort, so simply leaping to the side would be of little help because the predator would take note and redirect their path - in fact, you might actually be worse off, since said predator is now able to cut a corner, traverse the shorter diagonal and gain distance on you. Savvy military conquerors have exploited this fact for centuries to herd panicked civilian crowds to where they want them, although they need to keep the crowd in a state of panic so that no-one has a chance to consider the tactical advantages of veering off to the side.

See also 2-D Space, No Peripheral Vision and Blind Alley. Slower than a Speeding Bullet is a common subtrope of this. Can easily come off as "What an Idiot!", or Too Dumb to Live in especially egregious cases.

In the opening sequence, Homer runs straight into the garage, when he could've moved aside to avoid Marge's car.

Alternative Title(s): Prometheus School Of Running Away From Things

In the opening sequence, Homer runs straight into the garage, when he could've moved aside to avoid Marge's car.