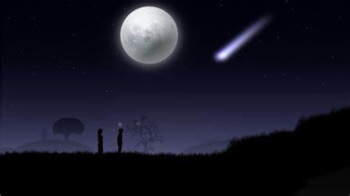 Take a walk through a starlit field. Uncover secrets of the world around you.
Advertisement:

Star Sky is a game initially released on iOS and, in September 2015, ported to the Wii U with a sequel releasing for multiple platforms in 2016.

Star Sky is not a game for everyone. It is a slow-paced game of exploring different choices. There are secrets to unlock, and for those who make it to the end, there are a lot of interesting things to reflect about. It is also a peaceful experience and a game about enjoying the ambiance the world around you can provide. Make the choices, watch what happens, unlock the secrets.

The game is meant to be a relaxing and ambient experience focusing on creating a soothing atmosphere rather than intense game play. It is similar to an interactive poem. A poem that has several endings and allow you to explore different scenarios. It is important that you take your time and allow yourself to feel the game as you play it.