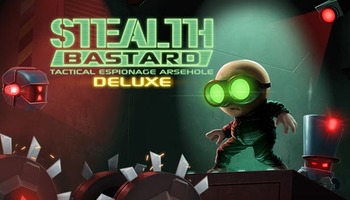 Stealth Bastard or Stealth Bastard: Tactical Espionage Arsehole is a stealth-based platformer video game by Curve Studios. It is distributed as freeware.

The objective of this game is to avoid cameras, robots, laser beams, circular saws, and other deadly obstacles in order to open up and reach each Level Goal.

. It comes with a level editor, and the many levels created by its community can be downloaded through the game itself. An Updated Re-release with new levels and additional perks titled Stealth Bastard Deluxe

is available for purchase on Steam.

A sequel, Stealth Inc. 2: A Game of Clones, was released on the Wii U in late 2014, with releases on Steam and Playstation in Spring 2015.