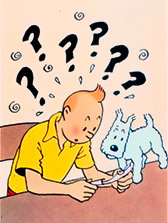 The question mark is a common, handy visual representation of confusion, surprise, or just being plain weirded out. It can manifest as several question marks floating around the nonplussed character's head, a single such symbol hovering over the character, or pop up as the contents of a thought bubble (or a regular Speech Bubble, in which case it seems to represent the "huh?" sound). Compare Visible Silence.

See also My Name Is ???, where it is used as a symbol of the unknown. Compare Alertness Blink.