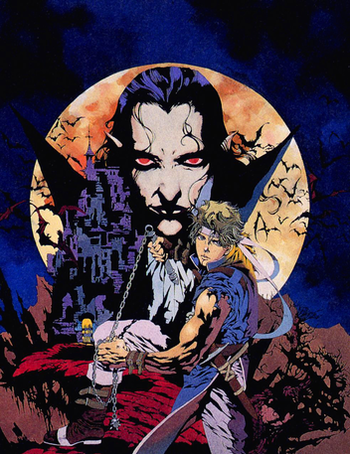 Castlevania: Dracula X (a.k.a. Vampire's Kiss) is a remixed port of then PC Engine-only Rondo of Blood for the Super Nintendo Entertainment System, released in 1995.

Evil men resurrect Dracula, who then proceeds to kidnap Richter Belmont's girlfriend Annet and her younger sister Maria and hides them in his castle. Richter then must follow his ancestors' footsteps by taking the horrors of castle by himself.

Many changes were made when the CD-based Rondo of Blood was turned into Dracula X due to the smaller storage capacity of SNES cartridges. The voice acting is gone, the game is much more linear due to overhauled level design removing the original version's branching pathways, the difficulty is ramped up (likely to compensate for the lessened replay value), and Maria is no longer playable. The story was also altered enough that it became incompatible with the main timeline, so the game is treated as being in an Alternate Continuity.