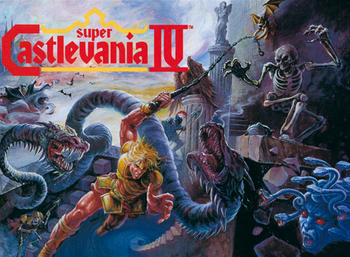 Super Castlevania IV is the first Super Nintendo Entertainment System entry in the ever popular Castlevania series, released in 1991 early in the system's lifespan.

While the English manual for the game implies that it is a follow-up to Castlevania II: Simon's Quest, this was a localization change and it is currently considered a retelling of Simon Belmont's first go at Dracula's castle (in Japan, the game has the Recycled Title of Akumajo Dracula, the same title the original NES game had).

It was one of the first games to appear on the Super NES, and was an exceptional display of the console's layering and Mode 7 graphical capabilities. Gameplay-wise, Super Castlevania IV improves the gameplay tenfold by allowing Simon to whip in any direction he wants as well as give him better jumping physics so the player has better control over where he lands. Add wonderful graphics and a spooky memorable soundtrack to all this and you've got what many gamers consider to be one of the best entries in the franchise.

Notably, several of the designers behind this game (such as Mitsuru Yaida, the programmer for Simon's moveset) would leave Konami to form Treasure a year after the game's release.