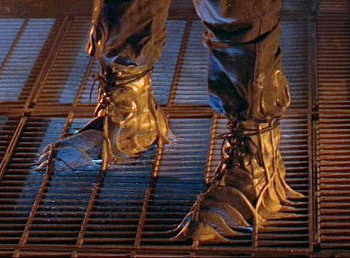 Shapeshifting Failure is when a shapeshifter can't keep one shape or loses some of their ability. This can be due to illness, injury, age, exhaustion, biological or chemical agents, anti-magic fields and the like. Distinct from Glamour Failure in that it doesn't involve glamours, psychic powers or illusion, their very body is in trouble.

Can lead to Shapeshifter Default Form if they lose control of their power, Shapeshifter Swan Song if they are dying, or This Was His True Form once they are dead. Mode Lock can result if they are forced into one shape and prevented from transforming. Several of the entries in Glamour Failure would be better placed under this trope.

Compare Game Face, where they have dropped their disguise on purpose. See also Morphic Resonance, when even in another form, a character has some traits that give away who they really are, although this is more a limitation than an outright shapeshifting failure.