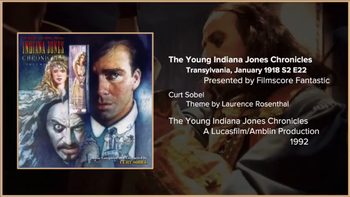 Indiana Jones versus Dracula, I want to see that!
Advertisement:

This is when your regular cast of beloved characters are dealing with the macabre children of the night, the wamphiri, the nosferatu, the vampire! Then you know you're watching a vampire episode.

Vampires are normally chosen to be in special episodes of non-fantasy shows. One possible reason for this is because they are (in the broader sense) more realistic than other kinds of mythological creatures thus, having vampires in a realistic show may not break realism too much. Of course, if the writer wants to break even less he or she can go for the "Scooby-Doo" Hoax ending, the Maybe Magic, Maybe Mundane or even the All Just a Dream in order to keep the laws of reality in place.

This is the Gothic Horror version of the Cryptid Episode. Normally used for a Halloween Episode, sometimes it's also the Bizarro Episode, it may also overlap with Fight Dracula. Needless to say, this trope applies only to works where vampires are not a common occurrence.