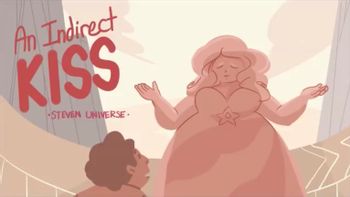 Steven, Connie and Lion are having a picnic near the lighthouse, but Steven is in a sad mood, even though he says he's fine.
Advertisement:

Connie asks about the fence, and Steven says it's a long story, and not a happy one. Cue Flashback.

Amethyst is playing around on the cliff's edge, and Steven is worrying that she'll fall. She makes fun of him for being worried about her, and insists that because she's a Gem warrior, she won't fall. But before she can finish the sentence, she does just that.

Amethyst: This is so embarrassing.

She lands facedown on an extruded rock with an audible CRACK! Steven races down to see if she's okay. Amethyst plays it off as if her new, unnaturally swollen and googly eye is a neat new acquisition, but Pearl snatches down Amethyst's shirt to the latter's embarrassment and determines that her gem is cracked. Pearl decides that there should be a fence along the edge of the cliff.

Back to the present moment, Connie senses that there's more to the story than that, but Steven is reluctant to go on. Connie presses the issue. Steven agrees to go on if he can wear her glasses. Connie agrees to let him wear them if she can have the rest of his juice box. Steven agrees, but warns it's mostly backwash.

Pearl and Garnet explain that Steven's mother Rose Quartz had healing powers from her tears. She felt real sorrow for others' pain and considering that since Steven has his mother's gem, he may have inherited the power. Steven tries to cry, but fails, declaring himself too tough to cry.

Pearl: Just the other day, you were crying about snakes!
Steven: They don't have any arms!

Amethyst insists it's no big deal, and that she won't get any worse, but as she speaks, she gets stuck on the word "worse" and when she's able to continue speaking, everything she says is backwards! The Gems warp to a place where Rose Quartz had a statue that ran with her healing tears. But when they get there, the fountain is nowhere in sight, and the sanctuary around it is covered in horrible thorny vines. Pearl begins to panic, but tries to stay calm like Garnet. Steven considers how to cry, and Amethyst manages to convey through charades that pain sometimes makes one cry. Steven approaches a thorny bush with intent to prick his finger, but the bush tries to attack. Amethyst leaps to protect him, further damaging her gem. Pearl scolds Amethyst for roughhousing.

Garnet punches through the brambles to the fountain — it's an enormous statue of Rose Quartz, roses in her hair, arms bent to cradle something. But the fountain isn't flowing. Steven becomes emotional at his first real look at his mother, but it's not enough to get his tears flowing. Garnet and Pearl go further into the thorns to investigate, while Steven stays with a rapidly worsening Amethyst, who is pixelating, and having random body parts go noodly and stretchy. He has a tender moment cuddling on the lap of his mother's statue, the description of which makes Connie gaze on him with big, tearful eyes.

The thorns continue to threaten Amethyst and Steven, leaving Steven to scramble around with Amethyst and her flopping appendages. Finally, he becomes upset at being useless, and that his uselessness will cost Amethyst her life. This is enough to make him cry. His tears fall onto Amethyst's gem, but — nothing happens. As Steven becomes frustrated that his sincere tears didn't work, the fountain suddenly begins to flow. The healing waters restore Amethyst to her normal self, and change the brambles to blooming roses. Garnet and Pearl return, and Steven eagerly tells thim his tears restored the fountain and saved Amethyst. Pearl tells Steven that she and Garnet unplugged a clog and that caused the fountain to resume flowing.

Pearl: Oh, Steven. You don't have healing tears. You'll never have any real magic powers, and we don't want anything more to do with you.

As the flashback ends, Connie is incredulous that Pearl would say such a thing. Steven admits that she didn't really say that, but that's how it felt to him. But now that he's told the story, Steven is upset again: he confesses that he's afraid that if he doesn't get a grip on his powers and how to use them, the Gems will leave him behind. He begins to sniffle and cry.

Connie leans in to comfort and reassure Steven that he doesn't need powers to be with her, but stops at a sudden pain in her head. She thinks something is wrong with her glasses and takes them off; when she does, her vision goes from blurry to clear. Connie can suddenly see without her glasses! The children stare at each other for a moment, uncomprehending, then Connie realizes she was drinking out of Steven's juice box (there are sparkles dancing on the end of the straw). Steven shouts in triumph:

Steven hugs Connie happily and thanks her for helping him discover his new Gem power, then runs off excitedly with Lion to tell the Gems. Connie contemplates her glasses, then simply pokes out the lenses and puts the empty frames back on her face.