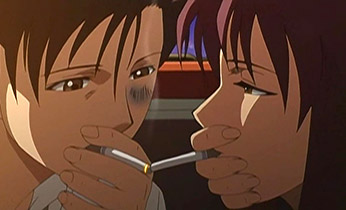 "I know you didn't wanna kiss me, but when I was taking a hit off that bottle before, I backwashed in it. I mean, like, really big-time."
— McKenas Cole, Alias
Advertisement:

Issues of physical contact taken to a logical extreme. The surprise is when someone is offered food or drink by someone they like, then realizes that swapping spit residue is similar to a kiss, albeit indirectly.

During The Hays Code era of American films, a couple smoking cigarettes together, particularly if they share one cigarette or light one with another, would suggest they were up to something more than kissing.

A form of this notion, the sharing of a drinking glass with a lover as an intimate act, appears in a treatise on romance by the Roman poet Ovid, making this Older Than Feudalism.