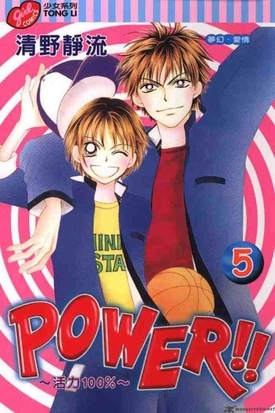 Originally Power!!, Girl Got Game is a ten-volume high school romantic-comedy manga series written by Shizuru Seino. It was serialized in Bessatsu Friend from 1999 to 2002, and first released in the United States in 2000 by Tokyopop.

Kyo Aizawa is a 16-year-old girl who moves to a new town with her widower father. Though upset at first, she becomes excited to be starting school at Seisyu High, as it is famous for its cute school girl uniforms. After receiving a boy's uniform in the mail, her father comes clean: He used to be a stellar basket ball player in his youth, but an injury permanently derailed his dreams of joining the NBA. As Seisyu is also famous for its top-ranking men's basketball team, he wants Kyo to dress up up as a boy and fulfill his dreams for him. Oh, and she has to live at the boy's dorm too since it helps build camaraderie! Kyo is furious, but he's already forged her paper, so with much reluctance, she goes through with his crazy plan.

What follows is an involuntary Twelfth Night Adventure as Kyo has to keep up with her male teammates, deal with her very unwanted female admirers, and put up with her Jerkass roommate, who she of course falls in love with, all, of course, while keeping her real gender a secret. It doesn't help that later she feels life as a boy is making her lose her femininity...

Despite the sports backdrop, Girl Got Game is a Shoujo manga first, and a rather wacky one at that.