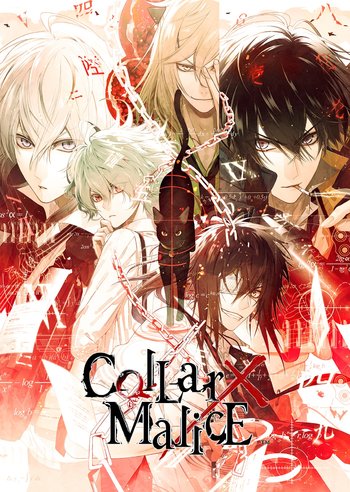 The countdown to X-Day will now begin.
The countdown to X-Day is a countdown to revenge.
A blessed slideshow in which criminals are judged.
Police who ignore people, vague laws, peace that only exists in theory, and formless justice...
You've heard the cries of the people harmed by all that malice, haven't you?
— Adonis to the protagonist, Ichika Hoshino
Advertisement:

Collar × Malice is set in Shinjuku, Tokyo during tumultuous times. A terrorist group known as Adonis has taken it upon themselves to administer justice on the tainted Japan. Adonis instigated a series of brutal incidents referred to as the "X-Day Incidents," where they execute those they deem unjust before publicly explaining why their target deserved to die. Each incident is counting down to the final "X-Day," which they claimed would lead to the rebirth of Japan. Fear stirred by this terrorist group led to Shinjuku quarantining itself and adopting an open arms policy, where anyone and everyone could own and use a gun. This only caused tensions in Shinjuku to escalate further.

Ichika Hoshino, the protagonist, is a rookie police officer working under the Shinjuku precinct. Despite having done nothing wrong, Ichika was attacked and collared by Adonis. She was quickly made aware that the collar has a poison delivery mechanism that could be engaged at any time, but Adonis quoted her as a "sympathizer" that they were more interested monitoring than they were merely executing. Ichika must now investigate the X-Day Incidents with a group of five men of various, suspicious backgrounds. Both her life and the fate of Shinjuku are at stake.

Her motley group of suitors and teammates include: