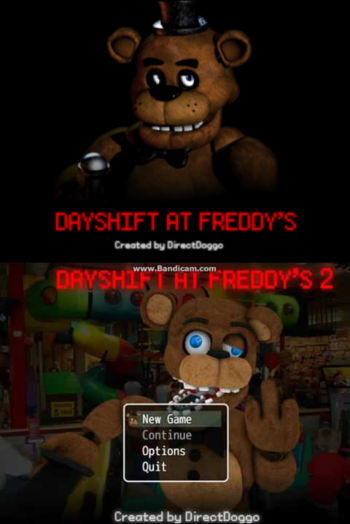 above; music box playing "Never Gonna Give You Up". below; music box playing "All-Star"
"This is a satirical take on the FNaF series where instead of hanging around during the night like a nightguard or a hooligan, you're there at an even scarier time. DURING THE DAYSHIFT."
— Game Jolt page
Advertisement:

Dayshift at Freddy's is a series of deliberately... weird Visual Novels made by DirectDoggo in RPG Maker, based on the Five Nights at Freddy's franchise. As the title suggests, you work the dayshift at Freddy's. The various activities you can do during the day include performing in a springlock suit, interacting with Freddy's employees from the original series, and yiffing the animatronics. Well, attempting to yiff the animatronics. Just try not to get killed, or worse, fired. Though the game is mostly pure comedy, your choices do have consequences and lead to 11 different endings in the first game, and 18 in the second. The game can be downloaded on GameJolt here

Dayshift at Freddy's 2 was released on June 30, 2017 and can be downloaded on Game Jolt here

. A third game, Dayshift at Freddy's 3, is said to be planned to be the final game in the series, has been released on December 29, 2018 in which can be downloaded here

, but he then reemerged in August 2018 to clarify that he hadn't stopped working on the game despite shutting down his accounts due to a major health scare

Because of how story and content heavy they are compared to the first game, both Dayshift at Freddy's 2 and 3 spoilers will be marked.

The Dayshift at Freddy's series provides examples of: