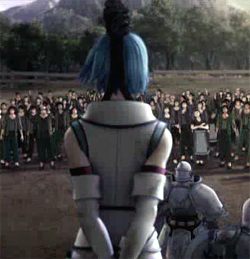 Just hangin' around, waiting for a rescue...
"What a day, what a day
For an auto-da-fé!
It's a lovely day for drinking
And for watching people die!"
— Candide, "Auto-Da-Fé"
Advertisement:

Since the beginning of recorded history, societies have used execution as the ultimate punishment for unwanted behavior. Performing these executions in public can serve multiple purposes outside of removing the soon-to-be-deceased from society: it can act as a deterrent to warn on-lookers against repeating the behavior in question, it can slake the blood-lust of a wronged and angry populace, it can increase the punishment by adding an element of public humiliation, and at times it can be down-right entertaining!

Public executions can come about for any number of reasons. They may be performed by a government as punishment for a crime. They may be carried out by a monarch seeking to suppress the plans of political enemies in order to maintain a solid grasp on the throne. Regular public executions may be broadcast as a kind of spectator sport in a Crapsack World, or in our own world 20 Minutes into the Future. They can even be done on the spur of the moment by an Angry Mob who manage to get their hands on the source of their ire, without so much as a Kangaroo Court. They are also a favorite of revolutionary forces; if they want to demonstrate what not standing with them will ultimately result in, a torturous and barbaric public execution is a great way to frighten people into standing with them and demoralize opposing forces.

The reaction of the In-Universe audience for the execution can serve as a reflection of the moral character of the society at that time. A crowd that does nothing but jeer, egg-on The Executioner, or even attempt to participate in the killing may indicate that the people of the land are blood-thirsty and crude. On the other hand, shock and horror displayed by those in attendance may be a sign that the populace is undergoing a Morality Adjustment for the better, and may even be indicative of growing disfavor for the rulers who would carry out such a barbaric spectacle. Conquerors foolish enough to use a public execution to quell the dissent of a Martyrdom Culture could accidentally provide the last fuel needed to touch off a revolution.

A public execution can also be used to show the true character of the condemned. A previously unrepentant criminal may become The Atoner in their final moments, and one who was a badass may break down into uncontrolled sobbing and plead for their life. Characters who truly don't fear death may treat it as a game, laughing and returning the insults of the crowd, or getting one last jab at the ruling government before they die.

If the executee is one of the good guys, their public execution may be the backdrop for a Big Damn Heroes moment as their comrades rush in to save the day.

Overlaps with Dead Guy on Display, as a public execution is one of the surest ways to make certain (and assure others) that someone is well and truly dead... if the execution isn't botched, or the prisoner rescued. Can also overlap with Deadly Game, in which the condemned are forced to fight for their lives in gladiatorial or gauntlet style contests.

Truth in Television for some parts of the world. Burn the Witch! and Hanging Around are notable types, both historically and in fiction.

Note that in order to qualify as an example of public execution, the act must be performed in front of a large audience. The modern practice of allowing a handful of witnesses to view an otherwise private execution would not count for the purpose of this trope. This trope is often feedstock to Squick and Nightmare Fuel.

At the Manburg Festival, Schlatt orders the execution of Tubbo, his right-hand man, for being a spy for Pogtopia, in front of the attendees of the Festival, to everyone's horror. Technoblade goes on to carry out the execution and go on a rampage, killing half the people in attendance.

At the Manburg Festival, Schlatt orders the execution of Tubbo, his right-hand man, for being a spy for Pogtopia, in front of the attendees of the Festival, to everyone's horror. Technoblade goes on to carry out the execution and go on a rampage, killing half the people in attendance.