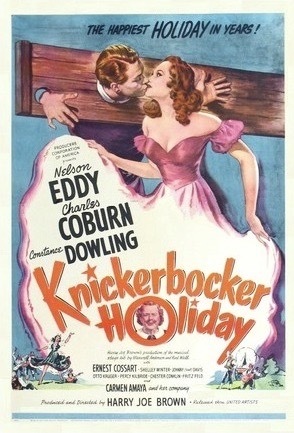 A musical comedy written in 1938 by Maxwell Anderson, with music by Kurt Weill, based In Name Only on Washington Irving's history of Old Dutch New York. It's probably best known today for introducing "September Song", which has become a much-covered standard.

The setting of the play is circa 1647, on the day when Pieter Stuyvesant is to assume the title of Governor of New Amsterdam. The day also happens to be Hanging Day, and the council of the city have a hard time finding somebody to hang, despite several of them being guilty of hanging offenses. There is also a hero, Brom Broeck, a poor knife-sharpener who is in love with Mynheer Tienhoven's daughter and suffers from a strange disorder which brings him into conflict first with the council and then with Stuyvesant. Ever since coming to America, Brom has found himself unable to take orders from anybody.

Walter Huston starred as Peter Stuyvesant in the original Broadway production. A film version was released in 1944, directed by Harry Joe Brown and starring Charles Coburn as Stuyvesant.