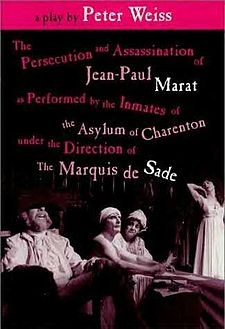 "Our play's chief aim has been to take to bits
Great propositions and their opposites,
See how they work, and let them fight it out,
To point some light on our eternal doubt.
Marat and I both advocated force
But in debate each took a different course.
Both wanted changes, but his views and mine
On using power never could combine.
On the one side, he who thinks our lives
Can be improved by axes and knives,
Or he who, submerged in the imagination,
Seeking a personal annihilation."
— Marquis de Sade, explaining the play. Maybe.
Advertisement:

The Persecution and Assassination of Jean-Paul Marat as Performed by the Inmates of the Asylum of Charenton Under the Direction of the Marquis de Sade (often shortened to Marat/Sade, for simplicity's sake) is a 1963 play by Peter Weiss which tells the story of, well...the title sort of covers that.

A brilliant play-within-a-play, the principal characters of the Tragedy are played by inmates with various wacky little quirks, ranging from narcolepsy to paranoid schizophrenia. Hilarity Ensues.

Oh, did we mention that this is also a musical?

The film-version, which was made by the Royal Shakespeare Company, is excellent. It can be watched (for the moment) on YouTube

There is also the 1967 film adaptation, directed by Adrian Mitchell.

The tropes of the asylum at Charenton: