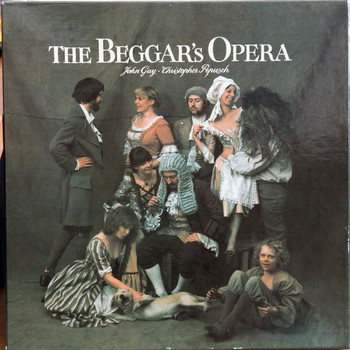 The Beggar's Opera is a ballad opera by John Gay, which premiered in 1728.

Supposedly written by a beggar, who comes out on stage at the beginning and end to talk to the audience, the show inverts and parodies opera conventions, using common folk tunes instead of specially-written music, and concerning the lives of the poor and vulgar instead of the high and mighty (though with many satirical asides suggesting that the high and mighty are not so different).

The central character of the opera is Macheath, a highwayman by trade and an inveterate womanizer by personal inclination. When the story begins, he is romancing Polly Peachum, whose father fences stolen goods and arranges matters for his clients when they get in trouble with the law (unless he's making less off their thievery than he would from turning them in for the reward money, in which case he'll do so without hesitation). Peachum is horrified to learn his daughter has married Macheath in secret — the more so when she professes to have done it for love, without thought of material advancement — and resolves to get Macheath into the hands of the authorities, but Polly helps him escape. Despite vowing love and fidelity to Polly, Macheath resumes his womanizing, until two of his girlfriends conspire to sell him out to Peachum. Macheath finds himself in jail, facing imminent execution; worse, the jail keeper's daughter, Lucy Lockit, is another ex-girlfriend, to whom he promised marriage before he fell in with Polly Peachum. He manages to persuade Lucy that his recent marriage is a fiction put about by Polly, and she helps him escape (the usual method of bribing his way out having failed, since Peachum and Lockit have united in wanting him safely dead and away from their daughters). Having delivered another round of protestations of love and fidelity, he returns to womanizing once again, until yet another ex-girlfriend sells him out, and he winds up back in prison. This time his time has come, and he is escorted away to the gallows...

...but the beggar returns to the stage and announces a Deus ex Machina reprieve, on the grounds that An Aesop is one thing, but modern audiences insist on a happy ending.

The Beggar's Opera was a massive success for its author, for its stars, and for the producer, John Rich; it was famously said that it made Gay rich and Rich gay. It inspired many imitations and adaptations, most famous nowadays being the German musical The Threepenny Opera, which debuted in 1928, The Beggar's Opera's bicentennial year.

Other adaptations include a film made in 1953 by Peter Brook and starring Laurence Olivier (it was the only musical he made during his movie career, but he considered it an Old Shame, though); Speakeasy, a 1998 Takarazuka Revue production; The Villains' Opera, a 2000 National Theatre production with a Setting Update to modern times; and The Convict's Opera, a 2008 Australian ballad musical about a group of convicts putting on a production of The Beggar's Opera (which is included, somewhat abridged, as a Show Within a Show).

The Beggar's Opera provides examples of: