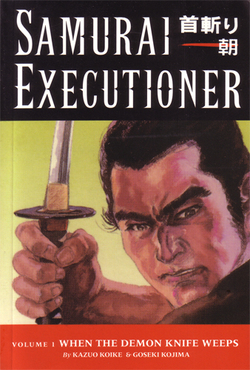 "Punished is not the man himself, but the evil that resides in him"
Advertisement:

Samurai Executioner is a spin-off manga series from Lone Wolf and Cub. It focuses on the encounters and experiences of one of Itto's opponents (Yamada Asaemon), the Shogun's sword-tester and executioner.

The series follows the progress of Asaemon's career as the Shogun's O-Tameshi and an official executioner. There are several important arcs throughout the series, interspersed with vignettes focusing on individual executions that Asaemon carries out. The series also follows the development of Sakane Kasajiro, the Edo-era equivalent of a beat cop who greatly respects Asaemon and views him as a mentor figure.