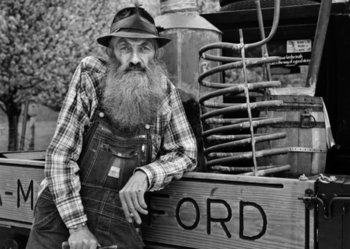 "Get you a copper kettle, get you a copper coil
Cover with new-made corn mash, and never more you'll toil
You just lay there by the juniper, while the moon is bright
Watch those jugs a-fillin', in the pale moonlight."
— Albert Frank Beddoe, Copper Kettle
Advertisement:

Someone who illegally distills whiskey from corn or other farm products in a rural area where alcohol is prohibited or heavily taxed.

The illegal activity is often carried out at night, which is how "moonshine" got its name. Other names include "mountain tay", "mountain dew" (not to be confused with the soft drink, which was named after the liquor), "poteen," and "white mule." Typically, the distilling process involves a copper still (the most basic version of which is a pipe run through a hollow log) set up in a remote clearing, preferably near a stream of soft water. The result is often a Gargle Blaster.

"Revenuers" or excise men often feature in these stories, hunting down the moonshiners, who often are willing to resort to violence to defend their work. Shipping out the finished product while evading them is a job best left to a Badass Driver (fun facts: in the United States, the extensive speed and performance modifications made to otherwise-ordinary cars made by these drivers during Prohibition eventually led to the establishment of NASCAR, while speedboats used for smuggling in the Caribbean influenced the design of WWII torpedo boats).

For the enlisted counterpart, see Military Moonshiner; obviously, when the hillbilly enlists he will often turn into one.