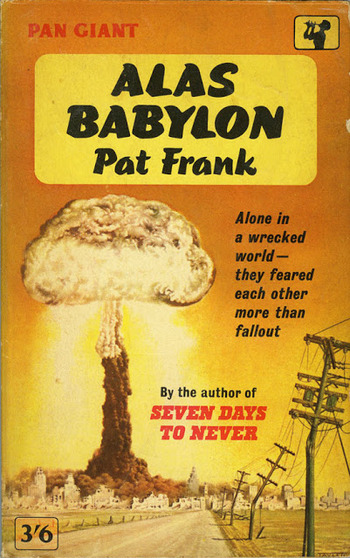 Alas, Babylon is a 1959 novel by American writer Pat Frank (the pen name of Harry Hart Frank). It was one of the first post-apocalyptic novels of the nuclear age and remains popular fifty years after it was first published. The novel deals with the effects of a nuclear war on the small isolated town of Fort Repose, Florida.

At the height of the Cold War between the United States and the Soviet Union, Fort Repose resident Randy Bragg, while making a comfortable enough living, is drifting through life with little real purpose. His brother Mark, an officer in the Air Force, warns him that nuclear war is likely imminent. Mark, who lives in Omaha, sends his wife, Helen, and his children, Ben Franklin and Peyton, to stay with Randy. While he waits for them to arrive, Randy warns his friends, including his neighbors-cum-sharecroppers, the Henrys, and his girlfriend, Lib McGovern. He stockpiles food, and picks up Helen and her children at the airport, amid reports that tensions are rapidly escalating between the two superpowers. The next morning, war breaks out, and nuclear weapons destroy all of Florida's major cities. Washington, D.C. is also destroyed; before their radio communication is cut off, the townsfolk learn that a low-level Cabinet official has become president. The power soon dies, Fort Repose is completely isolated, and with the help of Lib, her father, the Henrys, and his doctor friend Daniel Gunn, Randy takes up the challenge of organizing a militia against highwaymen and leading the town into a new life of agrarian self-sufficiency.

In the foreword of the 2005 edition of Alas, Babylon, David Brin admits that the book was instrumental in shaping his views on nuclear war and had an effect on his own book, The Postman. Alas, Babylon was also an inspiration for the TV series Jericho (2006).