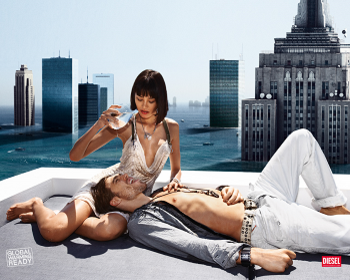 After retrieving the six-pack of Aussie beer that had been left dangling below the 4.0 Celsius thermocline (JUNO gave me absolute hell for that) while I slept, I settled comfortably into the pilot's seat while cradling a galley tray loaded with choice nibbles and commenced binge-watching the entire first season of Red Dwarf. Smegging brilliant.
— Alexander Fergus Selkirk, braving a hostile ocean planet, Aurora Falls
Advertisement:

"Cosy Catastrophe" is a term coined by Brian Aldiss.note To dismiss the work of fellow British Sci-Fi icon John Wyndham, particularly The Day of the Triffids. The book doesn't fit the trope, but the term has stuck none the less. The End of the World as We Know It has arrived and... our heroes feel fine. Sure, it's a pity for all those billions who just perished at the hands of super-plague/aliens/nuclear war. But for our safe, middle-class heroes, it means a chance to quit their day job, steal expensive cars without feeling guilty, sleep in a five-star hotel for free, and relax while the world falls apart around them. Maybe things weren't as good as they were in The Beforetimes, but all in all, life is still enjoyable. Especially if you brought your dog.

Maybe later they'll band together to recreate a humble yet sustainable pretechnological society. Maybe, if they're of mixed genders, they'll see it as their duty to repopulate the species (wink wink). Maybe they'll just learn to accept the extinction of the human race with quiet dignity. Either way, the end of the world shouldn't be the ... end of the world, so to speak.

Expect Arcadia since there's not as much pollution and construction.

Many have noted that the popularity of the Zombie Apocalypse in media is probably in part due to this trope. For people's sensibilities, a future in which you may be prey to flesh-hungry ghouls is worth it if at least you don't have to face all of the pressures and responsibilities of modern life anymore. In many ways, it makes life more interesting.

A high form of Escapism, as who wouldn't want to drop all the pressures of modern life, with the odd chance to prove your bravery and resilience? Compare with Scavenger World, After the End. Usually goes hand in hand with Apocalyptic Logistics. See also Disaster Democracy and Angst? What Angst?.

Not to be confused with Cozy Voice for Catastrophes.