Literature / The Year of the Cloud 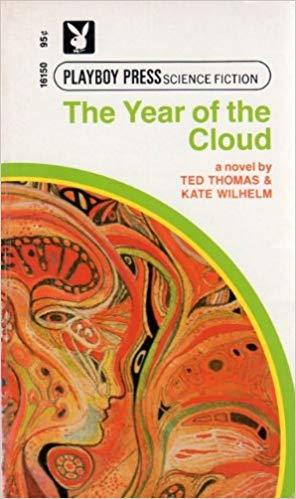 The Year of the Cloud is a 1970 Science Fiction novel by Theodore L. Thomas (credited as "Ted Thomas") and Kate Wilhelm.

Scientists at an observatory take photographic plates of a mysterious celestial object near Mars using a highly sophisticated telescope and determine it is a cloud of some sort. The cloud soon permeates the planet's atmosphere. Although Earth is only enveloped in its mass for a day before it moves on, the organic polymers start having an unusual effect on the environment.

Meanwhile, oceanographer Dr. Sam Brooks and his colleague Dr. Charlie Frazier along with a science reporter named Carl Loudermilch are out on the ocean collecting samples of seawater for analysis when they discover that the cloud is increasing water viscosity somehow. All water on Earth is slowly taking on a consistency roughly akin to gel. With nothing to drink, no rain, no water to irrigate crops and the oceans slowly solidifying into a viscous glop, Brooks, Frazier and Loudermilch, along with wealthy yacht owners Hugh Winthrop and Gail Cooper, stranded in the ocean, have to figure out a means of reversing the cloud's effects as order begins to break down around the world with Earth facing a potentially apocalyptic global drought.

This novel was Thomas and Wilhelm's second collaboration following the Blob Monster story The Clone. The paperback edition was published by Playboy Press, one of Playboy's more "legitimate" enterprises.