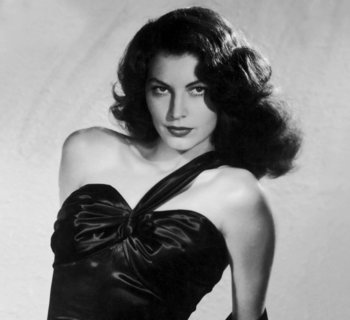 "You can sum up my life in one sentence, honey: 'She made movies, she made out, and she made a fucking mess of her life. But she never made jam.'"
Advertisement:

Ava Lavinia Gardner (December 24, 1922 – January 25, 1990) was one of the most famous actors of The Golden Age of Hollywood. She was well known for her arresting beauty and glamour, playing femme fatales and other stylishly beautiful women.

Gardner was born to a poor farming family in Johnston County, North Carolina.note A museum dedicated to her can be found in the county seat of Smithfield The family struggled for years, losing their farm in The Great Depression and moving to Newport News, Virginia to find work, only to suffer the death of Gardner's father in 1938. In 1941 she was visiting her sister in New York when her brother-in-law, a photographer, took a picture of her and put it up in his studio. This picture drew the attention of an MGM talent scout, and just that quickly, Gardner was signed to a contract.

Five years of mostly bit parts went by before Gardner's big break playing Kitty the Femme Fatale in groundbreaking Film Noir The Killers. This Star-Making Role propelled her to a run of hits in the late 1940s and 1950s in which she played various incarnations of beauty and class. In 1953 Gardner, usually considered more of a "movie star" as opposed to a great dramatic actor, got an Academy Award nomination for her part in Mogambo.

Gardner managed to extend her career as she aged by appearing in some Disaster Movies and working on television. Her very busy personal life included marriages to Mickey Rooney, Frank Sinatra, and bandleader Artie Shaw, and a longtime off-and-on relationship with Howard Hughes. Late in life, she suffered from various health problems including emphysema and a stroke. The stroke damaged her face, which led her to say to a would-be biographer, "I'd be lying to you if I told you that losing my looks is no big deal. It hurts, god damn it, it hurts like a son-of-a-bitch." (She was also known as a very candid interviewee and having a very foul mouth.)