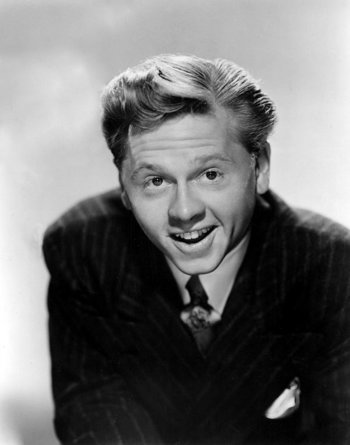 "I don't regret anything I've ever done. I only wish I could have done more."
Advertisement:

Mickey Rooney (born Joseph Yule Jr.; September 23, 1920 – April 6, 2014) was an American film and television actor whose career lasted 88 years—that's not a misprint, he worked for 88 years. He was, for a time, one of the biggest movie stars in the world.

He was born on September 23, 1920, in Brooklyn. His parents were vaudevillians and by the time he was one year old he was being brought onstage as part of their act. His parents got divorced when he was four and his mother took him to Hollywood. He made his film debut at 1926 and within a year was starring as "Mickey McGuire" in a series of short comedies—Rooney eventually became the last living star from the silent film era.

Eventually the former Joe Yule Jr. settled on "Mickey Rooney" as a stage name. He worked steadily as a teen actor. In 1937 he starred in A Family Affair, the first film in what became the immensely popular Andy Hardy series; the whole series eventually focused on the teen drama of Rooney's Andy Hardy character. Around the same time came a starring role as a troubled youth opposite Spencer Tracy in Boys Town, which won him a "Juvenile Academy Award". Rooney rocketed to super-stardom. Rooney's chemistry with Judy Garland led MGM to pair them in three Andy Hardy films as well as other musicals such as the Oscar-nominated Babes in Arms. He was the biggest box-office draw in Hollywood for three years running, 1939-41. He branched out into more serious dramatic roles in films like The Human Comedy.

Rooney served in World War II, entertaining troops overseas. His film career never again reached the heights it did when he was a teen actor; being 5'2" and looking incredibly boyish well into his thirties limited his ability to get grown-up film parts. He continued to work in film and television though, often as a character actor. His appearance as a Japanese character, Mr. Yunioshi in Breakfast at Tiffany's, is commonly cited as one of the most notorious Yellowface roles of all time. In 1981 he played a mentally handicapped man in the Made-for-TV Movie Bill; this won him an Emmy Award. He also worked on Broadway, including a starring role in the hugely successful 1979 musical Sugar Babies.

Apart from his lifelong friendship with Garland, his personal life could only be described as disastrous. Rooney was married eight times and had nine children. His first wife was Ava Gardner, who divorced him due to his serial infidelity. His fifth wife, Barbara Ann Thompson, was murdered by her lover, who promptly killed himself. He wasted all the millions he earned, declaring multiple bankruptcies and dying with a net worth of only $18,000. And if that weren't bad enough, his last years were marred by allegations of elder abuse that led to a restraining order against his stepson and a separation from his last wife.