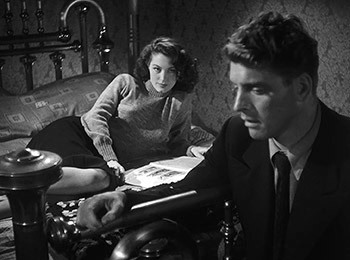 The Killers is a 1946 Film Noir directed by Robert Siodmak and starring Burt Lancaster, Ava Gardner, and Edmond O'Brien. It is based on a 1927 short story by Ernest Hemingway.

After Ole "The Swede" Anderson (Lancaster) is murdered by two mysterious hitmen, a life insurance investigator (O'Brien) interviews the deceased's friends and associates to find out who would want to kill him. Ultimately, his search links Swede to a past robbery and $250,000 in cash.

A remake was produced in 1964, directed by Don Siegel, scored by John Williams and starring Lee Marvin, John Cassavetes, and (in his last film role) Ronald Reagan. The main difference between the two films is that while it has basic plot similarities, the 1964 film has the titular hitmen as protagonists.

The short story provides example of: