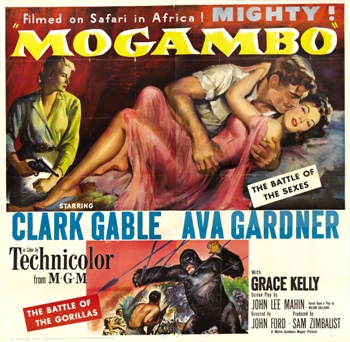 Vic Marswell (Gable) is a big-game hunter and safari guide in Africa. His existence on the savanna is disturbed by the arrival of Eloise "Honey Bear" Kelly (Gardner), a New York party girl who had traveled to Africa to meet an Indian maharajah. The maharajah didn't show up due to unrest in his homeland, so Kelly is stuck at Vic's safari camp. They trade insults for a while but eventually go to bed together. A week later the next boat arrives, bearing anthropologist Donald Nordley and his pretty wife Linda (Grace Kelly). Eloise is hurt when Marswell, wishing to avoid the appearance of impropriety, packs her away on the boat going back downriver. However, the boat runs aground, and Kelly has to come back to the safari camp, accompanying the Nordleys on their expedition to film African gorillas—while Vic is now showing great interest in lovely Linda.

Mogambo was a remake of Red Dust, a 1932 film that starred Gable, Jean Harlow, and Mary Astor. It was a rare late-career highlight for Gable, who hadn't made much in the way of good movies since Gone with the Wind. World-famous sex symbol Ava Gardner got recognition for her acting chops with an Academy Award nomination for Best Actress, while Kelly was nominated for Best Supporting Actress.