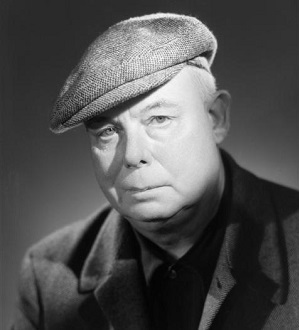 "Tu comprends, sur cette Terre, il y a quelque chose d’effroyable, c’est que tout le monde a ses raisons."
("The most terrible thing in the world is that everyone has their reasons.")
— Octave (Jean Renoir) in The Rules of the Game
Advertisement:

He was the second son of Impressionist painter Pierre-Auguste Renoir. His father had a major influence on the young man, who after serving in World War I, returned to nurse his father in his final days. While recovering from a battle wound, Renoir saw films by Charlie Chaplin or Charlot as he was known in France and became interested in movies. He made some interesting silent films starring first wife Catherine Hessling and when sound came in, pioneered several bold new techniques which made him a great talent in French cinema. Already in the 30s, years ahead of his time, Renoir pioneered use of recording sound on location, as well as several kind of camera techniques that make his movies seem more modern than most old films. In terms of content, Renoir brought a viewpoint of great complexity and challenged all kinds of received ideas of France and nationalism at the time.

His film The Grand Illusion became an international hit and got him nominated for Best Picture at the Academy Awards. His films after that include a proto-Noir La Bete humaine and a historical drama La Marseillaise that is one of the greatest films about The French Revolution. His final film before the Second World War was The Rules of the Game, which proved to be highly controversial in the year of its release but would later be Vindicated by History as a masterpiece of French Cinema and regularly competed with Citizen Kane on the all-time great films list. During WW2, he made some films in Hollywood that did not have the same impact as his French films, after the war, Renoir shot a film in India, The River and then made an ambitious trilogy of films that pioneered the use of color, achieving in cinema what his father did with painting. He was regarded as "le Patron'' or "The Boss" by the French New Wave and in his retirement in Beverly Hills, Hollywood, served as The Mentor for several young film-makers who regularly visited him.

Not to be confused with Jean Reno, a French actor born in Spain.