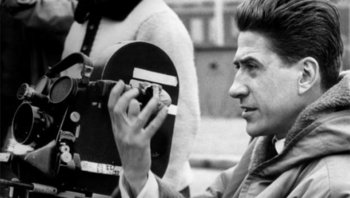 He started his career doing documentary shorts, winning an Oscar early on for a documentary on Van Gogh. He came to fame for his unique documentary shorts of The '50s which are seen as anticipating the genre of the "film-essay", including Toute la mémoire du monde shot in Paris's National Library, followed with Les Statues Meurent Aussi (co-directed with Chris Marker of La Jetée fame), a documentary that attracted controversy for its fierce denunciation of French colonialism.

However, the most famous of these films is Night and Fog, the first major documentary on the Holocaust, notable for juxtaposing archival footage with shots of the camps 10 years later. It pioneered several new techniques and was called the greatest film ever made by François Truffaut, it would go on to inspire many later films, including Claude Lanzmann's Shoah.

Resnais' distinct trademark made its appearance in these films, his unique approach to editing, camera movement, unconventional use of voice-over (they are often poetic and suggestive and don't tell the story or character motivations). He also edited the works of other film-makers, including Agnès Varda's La Pointe court. Although he would later be associated with the French New Wave, Resnais, along with Varda, Jacques Demy, Chris Marker are seen as belonging to the Rive Gauche (Left Bank) group. They were all politically on the left (the New Wave boys contrary to their rebellious bad boy reputation were actually Bourgeois Bohemian and apolitical at the start, only tilting left later). Resnais freely associated with France's literary and cultural scene. This is apparent in the fact that many of his screenwriters are a "who's who" of France's post-war experimental writers: Alain-Robbe Grillet, Marguerite Duras, Raymond Queneau, Jorge Semprun, among many many others.

His first feature film began as a commission to make a short documentary on the atomic bombing of Hiroshima, but Resnais instead made it a fiction film that was feature length. This was Hiroshima Mon Amour, which invented the technique of intercutting scenes with brief flashbacks to suggest a short flash of memory. It is considered one of the defining films of the time and has been called the equivalent of "The Birth of a Nation for French cinema". His next film would be Last Year at Marienbad, which both polarized viewers and became an international success being seen as "the arthouse film" or as Pauline Kael defined it, "come dressed as the sick soul of Europe party". Modern viewers might note it for being a film Don Draper sees in Mad Men. These films inspired works such as Point Blank, Petulia and several of Peter Greenaway and Steven Soderbergh's films. Resnais' later films are relatively obscure in the Anglophone but are likewise considered masterpieces by those who have seen them. He did enjoy one later popular international success with Mon oncle d'Amérique which has his quirky experimental style and wit.

Resnais is considered one of cinema's most versatile film-makers, famous for never making the same film twice, and making films in multiple genres and style. He has made documentaries, politically oriented dramas, gangster films, musical films, comedies, science-fiction, and so on, drawing from a wide range of references, classical and contemporary Hollywood cinema, comic books, musicals, experimental avant-garde literature and theatre, and so on. Resnais would continue to innovate until his death at the age of 91.