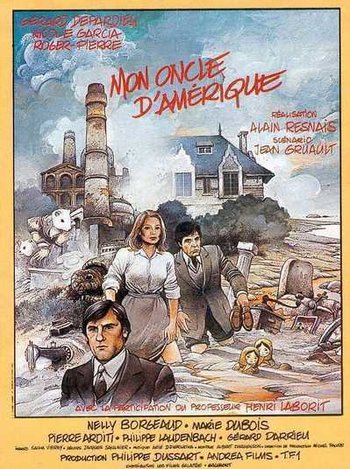 On one level it is a collection of three separate but interrelated stories. René (Depardieu) is a farmboy who yearns to escape his father's farm, and eventually finds work in a textile firm. Janine (Garcia) is a young communist radical who finds work as an actress, against her parents' wishes. Jean (Pierre) is an upper-class man who works in the government's Ministry of Information and also writes. All deal with pressures at work and at home typical of working people in urban France. Although René's and Jean's stories do not ever intersect, Janine interacts with both of them, first as Jean's lover and then as a business associate of René's.

On a second level, it is a documentary about the unconscious brain and how basic human instincts, such as the urges to survive and procreate, shape human behavior. This part is centered around scientist Henri Laborit, who appears as himself. It is Laborit's thesis that little about human behavior is the result of our own conscious choices. According to Laborit, most of our choices are driven by the basic animal brain and its response to needs such as hunger and thirst and stimuli such as pleasure and pain. What choices we make that aren't driven by the animal brain are in fact the result of sociological conditioning, on how we have been trained and influenced by our parents, our families, and our work environments. Laborit's theories are illustrated by experiments performed on rats—and also by the three protagonists, who react to stimuli in much the same ways.