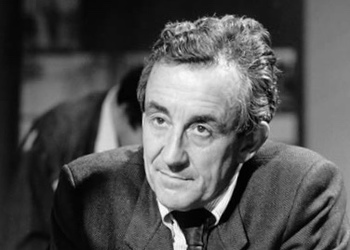 "You see the world much better through a camera."
Advertisement:

Louis Malle (30 October 1932 – 23 November 1995) was a French film director, producer, and screenwriter. He was a contemporary of the French New Wave and is sometimes listed as a part of the movement, but he did not consider himself a member, and rejected several of its tenets such as The Auteur Theory.

The fifth of seven children in a wealthy industrialist family, Malle was sent to a Catholic boarding school at the age of 12. However, during his time there, several Jewish students and a Jewish teacher were sent to Auschwitz after a Gestapo raid. Malle would fictionalize this event in Au revoir les enfants and it most likely contributed to the cynical tone of many of his movies.

After studying film at the Sorbonne, he worked as an assistant for Robert Bresson on A Man Escaped before working with Jacques Cousteau as a cameraman and co-director on The Silent World, which would later earn both an Oscar and the Palme d'Or. Cousteau would later call Malle the best underwater cameraman he had ever worked with. Malle would make his solo directorial debut with Elevator to the Gallows, a noir thriller which featured a famous score by Miles Davis, and made a star of Jeanne Moreau.

His next film, The Lovers, was an adultery drama that became highly controversial due to its sexual content. A theater owner in Ohio, named Nico Jacobellis, who showed the film was charged with obscenity and fined $2,500. However, Jacobellis continued to appeal to higher courts until he reached the Supreme Court, which ruled that the film was not obscene. The case is now considered a landmark in free speech laws and Justice Potter Stewart's definition of pornography (I will know it when I see it) has been subject to a good deal of Memetic Mutation.

This would not be the only time Malle was the subject of controversy. He directed two documentaries about India that caused the Indian government to ban not only him, but also the BBC from filming in the country for several years. He would go on to deal with subjects such as incest in Murmur of the Heart, France's capitulation to the Nazis in Lacombe, Lucien, and child prostitution in Pretty Baby, which would be accused of child pornography due to a nude scene by 12-year-old Brooke Shields.

None of this was enough to significantly damage his career, as he managed to find work in both France and Hollywood, making many different kinds of film (comedy, adventure, crime, war, surrealist) until his death at the age of 63. He continues to be cited as an influence by filmmakers such as Wes Anderson and Noah Baumbach.