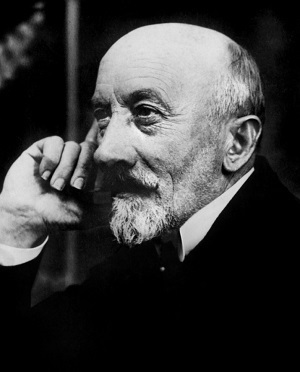 Marie-Georges-Jean Méliès (8 December 1861 – 21 January 1938), better known as Georges Méliès, was a French magician-turned-filmmaker who pioneered the concept of telling stories on screen.

In doing so, he either invented or codified almost all of the Special Effects used in film until the dawn of CGI—and even modern digital effects are essentially more advanced versions of the stop motion, multiple exposure, and matte painting techniques he pioneered. For instance, modern green-screen techniques are modeled after his technique of filming actors or objects in front of a black background, then using a second exposure to record the background. In one film, he played all seven members of a band using this method!

His most famous work is A Trip to the Moon, but he made about 500 other short films in his 1896–1913 career, including the early biopic Joan of Arc. More than 200 of them are known to survive, and every now and then a new rediscovery is made.

The Martin Scorsese film Hugo is a Sidelong Glance Biopic of Méliès, starring Ben Kingsley as the filmmaker himself.