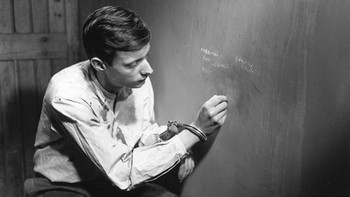 The film is set during World War II and the German occupation of France. A man named Fontaine (François Leterrier), a member of the French Resistance, is clapped into Montluc prison in Lyon, and after being beaten by the Gestapo, is left to ponder his fate. One day he notices that while his cell door is made out of stout oak wood, the panels of oak are joined together with lesser quality, softer wood. When he gets an iron spoon with his lunch pail, he pockets it, and discovers that he can saw through the joints. Eventually he's able to remove the wood panels. He then begins to plot his escape.

Based on the Real Life memoir of Andre Devigny

, who really did escape from Montluc prison in August 1943.

The protagonist opening his handcuffs with a pin

Example of:
Cuffs Off, Rub Wrists

The protagonist opening his handcuffs with a pin