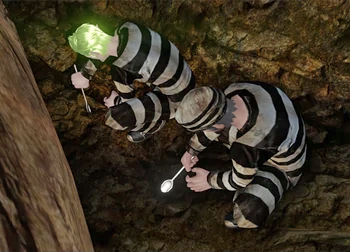 When being held prisoner, the natural inclination is to escape. And your chances of escape are greatly improved if you have some kind of weapon. So naturally captors are careful not to allow their prisoners access to any kind of weaponry. However, prisoners still need to be fed, and that usually involves some kind of utensil. And an eating utensil can make a handy improvised weapon. Or a useful tool for digging.

Cutlery Escape Aid is when a captive attempts to steal an eating utensil to use as a weapon or otherwise aid in their escape. This is one of the things a hero might attempt during a No, Mr. Bond, I Expect You to Dine scene. May be delivered by means of a Jail Bake.

This is very common in Real Life. Cutlery make the most common types of "shiv", as even a plastic spork is deadly if its handle is sharpened against a wall.