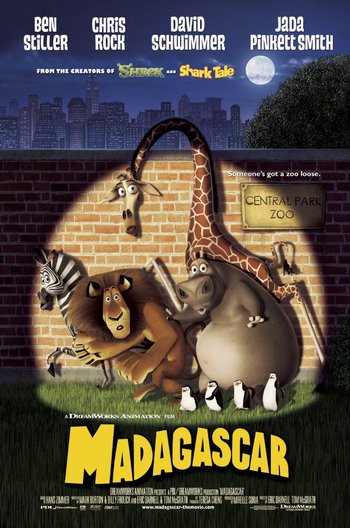 They weren't born in the wild. They were shipped there.
Advertisement:

Madagascar is an American 2005 computer-animated comedy produced by DreamWorks Animation. The movie is about four friends — Alex the Lion (voiced by Ben Stiller), Marty the Zebra (Chris Rock), Gloria the Hippo (Jada Pinkett Smith) and Melman the Giraffe (David Schwimmer) — who live in New York's Central Park Zoo. Since they have lived their whole life in the zoo, they are unaware of what the wilderness is like or the fact that Alex is their natural predator (he believes the natural role of lions is to perform song-and-dance numbers). After they are shipped off to a wildlife reserve for escaping, they become shipwrecked on the coast of Madagascar. There they meet a society of lemurs and Alex's true nature as a carnivore starts to emerge.

There have also been two Christmas Specials: the short film A Christmas Caper (set before the first movie) and the TV special Merry Madagascar (set between the first and second movies). A Valentine's Day TV special, Madly Madagascar, has been released as well, set between the second and third movies. Like with many animation properties, a series of tie-in games exists.

The series is notable for featuring the voices of comedians Chris Rock and Ben Stiller, as well as Friends alumnus David Schwimmer. On March 29, 2009 a Spin-Off called The Penguins of Madagascar premiered on Nickelodeon. It takes place in Central Park Zoo and most notably features the penguins, lemurs, and chimps, and is not canonically related to the films. The main cast do not make appearances in the series though Alex has a cameo in one of the specials as Skipper's spirit guide.

In November 2014, a spin-off film, Penguins of Madagascar, was released. As its name implies, it focuses on the penguins, although it's in canon with the movies instead of the TV series, taking place after the third film. On December 19, 2014 another spin-off series All Hail King Julien premiered on Netflix, this time taking place on Madagascar prior to the events of the first film.

In January 2020, another spin-off Madagascar: A Little Wild was announced, featuring the main quartet as kids residing in their rescue habitat at the Central Park Zoo. It was released on Hulu on September 7, 2020.

Don't give me excuses, give me tropes!:

Example of:
This Is My Side