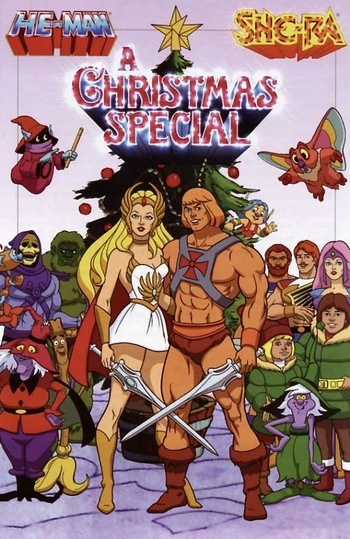 Eternia celebrates the birth of Christ... with senseless violence!
Advertisement:

Primarily an American phenomenon, these are special television programs, often one-shots, created with a Christmas or (northern hemisphere) winter theme for broadcast during the month of December. While some of them depict what the holiday originally commerorates — the birth of Jesus Christ — or make it key to the plot in some way (for instance, A Charlie Brown Christmas involves the staging of a Nativity play), most are secular in nature, to appeal to as wide an audience as possible. Many of them prominently feature Santa Claus and his associated mythology. Some try to educate the viewers about the True Meaning of Christmas. Plots frequently involve the characters Saving Christmas.

The best-known Christmas Specials are probably the animated ones (including the stop-motion animations produced primarily by Rankin/Bass) made in the 1960s, '70s, and '80s and rerun annually. Far more numerous, though, are the various celebrity specials, which usually take the form of a low-key holiday-themed Variety Show. Usually the latter are rather forgettable by virtue of their one-off nature, but every so often they can generate moments that survive decades. A case in point would be the now-iconic duet of "The Little Drummer Boy" performed by Bing Crosby and David Bowie, which has taken on a life of its own far above and beyond the 1977 Crosby special from which it sprang.

Compare Christmas Episode (which is generally known as a "Christmas Special" in the UK), Easter Special, and Halloween Special. If the special depicts a holiday that resembles Christmas but has been renamed to match the setting, then it's a You Mean "Xmas" Special. See also Julekalender, a type of Christmas-themed TV series in Scandinavia.

The opening of "A Charlie Brown Christmas"

The opening of "A Charlie Brown Christmas"