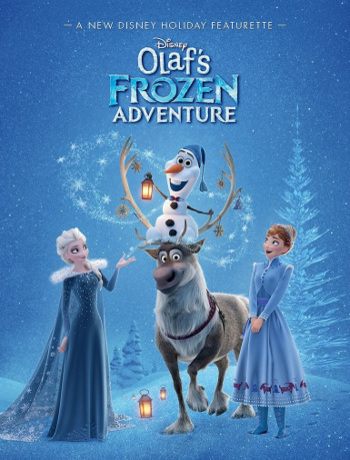 And the greatest tradition is...fruitcake!
"Happy, merry, holly, jolly season's greetings here!
I'm wondering what your family does at that time of year.
Love and joy and peace on Earth and tidings of good cheer
Do you have tradition
Things for that time of year?"
— Olaf, singing "That Time of Year"
Advertisement:

Olaf's Frozen Adventure is a 2017 computer-animated short film directed by Kevin Deters and Stevie Wermers-Skelton. It is the third theatrical installment in the Frozen franchise, and follows Frozen (2013) and Frozen Fever. It stars Kristen Bell, Idina Menzel, Jonathan Groff and Josh Gad.

It's the first holiday season since Queen Elsa of Arendelle reopened the gates, but she and Princess Anna find that they never had a holiday tradition of their own due to being separated for so long. Determined to save the holiday for his friends, Olaf, with help from Sven, sets off to comb Arendelle in search of the perfect family tradition.

Originally announced as a half-hour TV special for ABC, Olaf's Frozen Adventure was released theatrically in front of Pixar's animated feature Coco for a 2-week limited engagement. It clocks in at 21 minutes long, three times the length of most of the shorts that play before Disney/Pixar features, and it is Disney's first featurette-length theatrical short since 1990's The Prince and the Pauper. It marked the first time that a Disney short ran in front of a Pixar film rather than Pixar making one of its own shorts. Later on the original plans resurfaced, and it did get an airing on ABC shortly after the end of its theatrical run, making it both a TV special and a theatrical featurette.

Olaf is given a candy cane and experiences a "sugar rush" with it.

Olaf is given a candy cane and experiences a "sugar rush" with it.