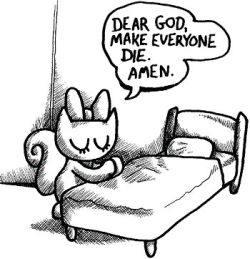 "I pray your brakes go out running down a hill.
I pray a flower pot falls from a windowsill,
And knocks you in the head like I'd like to.
I pray your birthday comes and nobody calls.
I pray you're flying high, when your engine stalls
I pray all your dreams never come true.
Just know wherever you are honey, I pray for you."
— Pray For You,

by Jaron and The Long Road to Love
Advertisement:

A character is praying to God or to other similar deity known to be benevolent and merciful. However, this devotee is praying for malice, begging God to be petty and cruel. The technical name for this kind of thing in Christianity is an "imprecatory prayer", although there is much controversy over whether God would ever answer or approve of one. The more colloquial term for this kind of thing is a Curse, especially if this prayer has any kind of supernatural effect.

If the character does this in a way that superficially comes across as very sweet and innocent, it may be Sugary Malice as well. Simply praying for victory in a conflict does not count (unless the prayer is accompanied by expressions of ill will toward the opponent over and above implicitly hoping they lose).

Subtrope of Egocentrically Religious. Compare Holy Hand Grenade, when divine malice is weaponized in a holy artifact, which may easily overlap if the artifact is summoned by prayer. Compare and contrast Smite Me, O Mighty Smiter!, when a person dares God to be malicious to themself. If played for Black Comedy, it's overlapping with Silly Prayer.

open/close all folders
Anime and Manga
Comic Books
Fan Works
Film
Literature
“Though their horses and chariots are like a river unto Creation, though their spears be forest and their swords be mountains, the Gods pass judgement unto them. Do not dread, for I bear the word of the Heavens and that word is begone.”
Live-Action TV
Music
Religion
Tabletop Games
Video Games
Web Comics
Web Original
Western Animation
Feedback

These nuns are **absolutely not** employing this trope against this pilot.

These nuns are **absolutely not** employing this trope against this pilot.