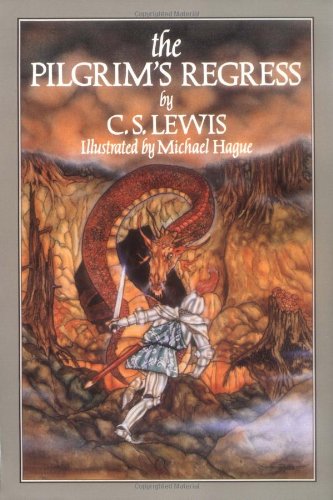 Here there be dragons.
Advertisement:

The Pilgrim's Regress is an allegorical novel by C. S. Lewis, dramatizing the process of his conversion from atheism to Christianity and defending his love for Romanticism in literature and music. It was his first published work of fiction, and his first writing after his conversion.

The story traces the wanderings of an Everyman character named John, who leaves his boyhood home in Puritania in search of a beautiful island that has haunted him in visions since childhood. Accompanied by his traveling companion Vertue, John journeys through bizarre lands and encounters many characters and monsters that represent various philosophical and ideological movements that were in vogue in the late nineteenth and early twentieth centuries. Eventually, though, John begins to realize uncomfortably that his quest for the Island might be taking him back toward his abandoned belief in the existence of the Landlord....

The title, of course, is a play on the title of John Bunyan's The Pilgrim's Progress.