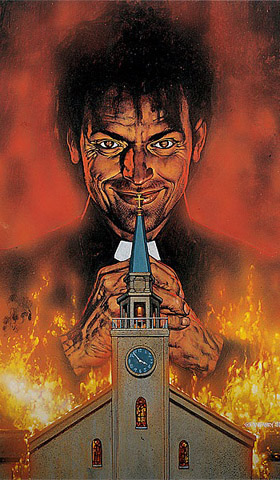 Not everyone actually practices what He preaches.
"By killing her I took her physical life, but saved her life eternal. You see how all things serve the will and the mind of God? You see, you meddling little shit?!"
— Reverend Lester Lowe, Silver Bullet (1985)
Advertisement:

Men of the cloth serve a plethora of roles in all branches of media, both modern and ancient. They may be wise counselors, corrupt bureaucrats or confused and bumbling but generally well-intentioned old duffers. But every once in a while, a preacher crops up who is intimidating, charismatic and completely devoid of morality. These archetypal villains typically serve as the Big Bad in their respective worlds, controlling vast hordes of starry-eyed True Believers or manipulating the inner workings of their Church. He is often a White Anglo-Saxon Protestant clergyman, but there's nothing saying he can't not be a white Anglo-Saxon and there's definitely nothing saying he can't be a Catholic (especially if the setting is in the Middle Ages), and is clean-cut and perpetually smiling while delivering sermons that alternate between gentle reminders of the importance of virtue and scalding fire-and-brimstone rants commanding their followers to rise and smite heathens in the name of the Lord, amen.

The Sinister Minister is a one-man Corrupt Church (and it's usually a man in this role, though female examples are not unheard of) in that all power typically ends up resting firmly in his hands and his hands alone as opposed to being shared out within an organization. He seldom employs Sidekicks or advisors, preferring to rely instead on his own usually very devious brain for scheming while entrusting the main grunt work to the hordes of unwashed and sanctimonious Mooks who make up the bulk of his followers.

Usually well-educated and cultured, the Sinister Minister is nonetheless unspeakably evil and regularly engages in acts of sexual depravity (or perhaps not; many a Sinister Minister is Straight Edge) and, if not outright violence, threats and intimidation. Or, he may even be an Enlightened Antagonist who feels one with faith. The Sinister Minister usually keeps his own hands relatively clean until late in the game when his power base is secure and he can act with impunity.

There are typically two types of Sinister Minister. The first type is subtle and deceptive, using soft words and a friendly attitude to gain trust among his congregation; in this way, he's much like any other man of the cloth, but his true motives are anything but typical, taking advantage of that trust once he has it. The second type is far less subtle, using scare tactics in the form of fiery sermons to convince people that God is a vengeful Creator who will not hesitate to condemn "heretics" (a favorite word this villain has for anyone who disagrees with him) to the pits of Hell or even smite the world early unless they follow what he calls his ideal path. It's amazing how well this can draw people in, and if the Sinister Minister does it enough, even he might start to believe it.

The motivations of the Sinister Minister may be as simple as lust for power, though some are examples of the Church Militant and Knight Templar. A common motivation for the more religious among this trope's subjects is the Mission from God, which is often either a personal delusion on the part of the Minister or in reality a mission from a Satanic or otherwise Evil divine power. In the case of those simply out for their own gain, the Minister may be skeptical as to God's existence/power or harbor outright atheistic views.

If there is a Good Shepherd in the series, then the two are usually enemies. However, if the Good Shepherd is a Horrible Judge of Character then he might actually be a supporter of the Sinister Minister (at least until he discovers the truth).

Unmasking the Sinister Minister is a waste of time, as his followers will believe any lies and fabrications the Minister employs as a cover against the brave heroes attempting to reveal him for the monster he really is. This particular school of villainy usually meets its end violently, not through rhetoric.

The Corrupt Church tends to be rife with the likes of him, but the Saintly Church may also prove to have a few black sheep.

Not to Be Confused with high level government officials — if they're a villain, they'd fall under Evil Chancellor. Also not to be confused with any high-ranking worshippers of a Religion of Evil; this Trope is for corrupt members of established and (hopefully) respected faiths.

Contrast Nun Too Holy, a trope about genuinely good members of the clergy who somehow continue to hold their offices despite being hugely obnoxious or depraved, in a lovable way. If the villain is merely pretending to be a priest or nun, then that's Bad Habits. If at least one of the things that makes the minister "sinister" is that fact that he molests children, then you're dealing with a Pedophile Priest. One who pretends to have healing powers is a Fake Faith Healer. For a priest that is simply a lecher, see Dirty Old Monk. See also the Churchgoing Villain, who does not necessarily have to be a religious leader. Super-trope to Evil Jesuit.

In terms of rank, the Authority Tropes arguably equal are Corrupt Corporate Executive, Irish Priest, Preacher Man, Pedophile Priest, Schoolteachers, Sexy Priest and The Vicar. For the next step down, see Student Council President. For the next step up, see Dean Bitterman.

The trope name was also a name (and gimmick) used by professional wrestling manager James Mitchell, as well as a song by Bela Fleck and the Flecktones. Contrast Good Shepherd, Badass Preacher.