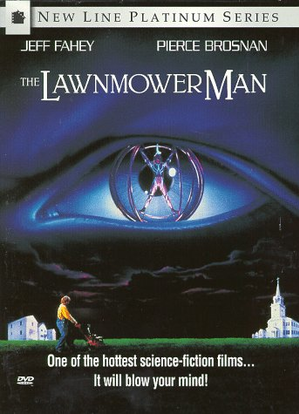 God made him simple. Science made him a god.
"I am God here!"
— Jobe Smith
Advertisement:

The Lawnmower Man is a 1992 Science Fiction film starring Pierce Brosnan and Jeff Fahey. It was directed by Brett Leonard who wrote the screenplay together with Gimel Everett. The film's title is taken from the Stephen King short story of the same name, but aside from a single scene that is (more or less) the same, the two works share absolutely no similarities.

Brosnan plays Dr. Lawrence Angelo, who works for Virtual Space Industries developing a intellect-enhancing program known as Project 5, which increases the intelligence of chimpanzees using drugs and virtual reality. But when one of the chimps goes on a rampage through the lab with a gun, Angelo decides to quit the experiment and start a new life elsewhere. He soon meets Jobe Smith (played by Fahey), a mentally handicapped lawnmower man, whose guardian is an abusive priest named Father McKeen (Jeremy Slate). Jobe is also friends with Peter Parkette (Austin O'Brien), Angelo's neighbors' young son. Angelo decides he would like to continue his studies of intelligence enhancement, but without needing to apply it for military purposes. He realizes that he needs a human subject, and that Jobe would be the perfect candidate.

Angelo convinces Jobe to be the subject of his experiments, telling him it will make him smarter. The experiments are successful and Jobe's intelligence starts to grow as a result, and he even begins to exhibit powers of telepathy and telekinesis, being able manipulate objects with his mind, as well as hear the thoughts of others. Unfortunately, Angelo’s boss secretly swaps Angelo’s new serum for the original Project 5 formula, turning Jobe aggressive. With his newfound intelligence and powers, Jobe soon decides that it was about time he punished those who have wronged him throughout his life...

Basically, think Flowers for Algernon crossed with TRON and a latter act with similarities to Elfen Lied, and you're somewhere on the right track.

A sequel was greenlit called Lawnmower Man 2: Beyond Cyberspace in 1996. Almost none of the main actors reprise their roles (with the exception of Austin O'Brien, who plays Peter).