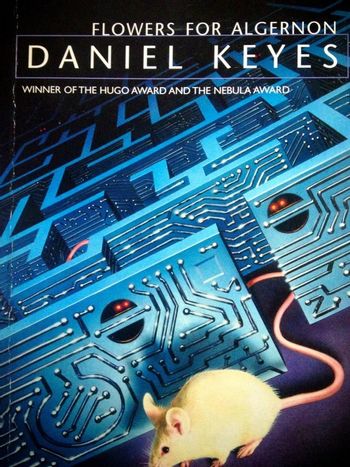 "Any one who has common sense will remember that the bewilderments of the eye are of two kinds, and arise from two causes, either from coming out of the light or from going into the light, which is true of the mind's eye, quite as much as of the bodily eye."
— Book VII of Plato's The Republic
Advertisement:

Written by Daniel Keyes and originally published in The Magazine of Fantasy and Science Fiction (April 1959 issue). "Flowers for Algernon" is a Science Fiction Short Story that tells of a young man named Charlie Gordon who has an IQ of 68, but tries hard to learn and become normal. In 1966, the story was expanded into a Novel, and won the Nebula Award (tying with Babel-17).

Charlie works at a bakery with people he considers his friends. His instructor, Alice Kinnian, teaches him at the Beakman College Institute for Retarded Adults, and she is the one who informs him of a possible cure: a surgery designed to improve his mental capacity. The people putting this surgery into action are looking for a human subject, having already had a successful result with the eponymous Algernon, a lab mouse.

Charlie gets the surgery and his intelligence quickly blooms. While this is happening, he falls in love with Alice, but soon finds that he cannot relate to her because he is much smarter than she is. Furthermore, he discovers that his friends have not been as trustworthy as he thought they were, and he begins to recall memories from his childhood, finding even more incidences of trickery and ridicule. As a result, he becomes quite jaded and cynical.

His intelligence tops out at 185, where he is deemed a certified genius. At this point, he is frantically soaking up all the knowledge he can, and is becoming aware of a sharp decrease in Algernon's intelligence. Charlie begins to research the effect and eventually publishes his findings, having realized that he will suffer the same decline and return to his original mental state.

Told entirely in journal entries ("progress reports"), the book does a wonderful job of showing how Charlie's intelligence changes. It is often used in School Study Media.

It's one of the more famous books that has been banned from schools, thanks to its sexual content and profanity (except for certain copies that have it severely reduced, so as to avoid it.)

Adapted into the teleplay "The Two Worlds of Charlie Gordon", which aired as a 1961 episode of the anthology series The United States Steel Hour and starred Cliff Robertson in the title role; Robertson later reprised the character in the 1968 feature film Charly, for which he won a Best Actor Academy Award. There was also a 2000 Made-for-TV Movie adaptation starring Matthew Modine.

Also adapted into a 1978 musical known variously as Charlie and Algernon in London and by the original title on Broadway. In America, at least, it lasted only 17 performances.

And adapted into two different Japanese live-action drama series both titled Algernon ni Hanataba o; one in 2002 and the other in 2015. The protagonist of the first series is named Haru Fujishima while the protagonist on the second is Sakito Shiratori.

For a similar story with a more sci-fi edge, see also the In Name Only film version of The Lawnmower Man.