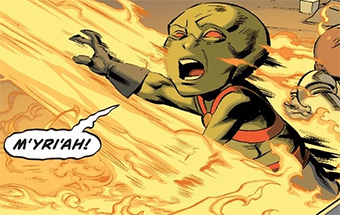 "They call the w'nd M'yri'ah!"
"Note to would-be adventure authors: When making up names, note that the apostrophe is not some sort of universal stand-in for vowels. Stop doing that."
— Shamus Young, Chainmail Bikini #1
Advertisement:

One of the easiest ways to give an exotic or alien spin to words intended to have originated from an exotic language is to sprinkle it liberally with unexpected punctuation marks. Most often, this is done with apostrophes, perhaps because it appears in such a wide variety of purposes in various real languages that one might figure something would have to fit in a pinch.

This trope may not apply when punctuation or tongue-clicks are a natural part of the language the story is written in; linguistics may even treat them as unique letters in their own right. Most commonly, though, no actual purpose for these marks ever crystallizes; they serve merely as a form of visual seasoning that may not ever be acknowledged in actual pronunciation. In other languages, an apostrophe usually means a glottal stop (we mean glo'al), an aspirated consonant, such as in Mandarin Chinese names Latinized in Wade-Giles (see examples below in the "Real Life" section), or ejectives, which English speakers would probably be most familiar with as "beatboxing sounds", and do differ in pronunciation from unapostrophized text.

After the apostrophe, the second most common punctuation mark is the diaeresis/umlaut (two different diacritics but both indicated by ẗwö döẗs övër ä lëẗẗër). In real life, the umlaut is used to indicate a difference in pronunciation (for example in German: fallen "to fall," fällen "to fell"), and a diaeresis is used to indicate that two vowels are pronounced separately rather than forming a diphthong (for example coop, as in the thing chickens live in, vs "coöp", an archaic way of writing co-op, a short form of cooperative). Its use in fantasy was probably popularized by J. R. R. Tolkien (like many fantasy devices), who used it a lot; he used acute and circumflex accents even more. However, Tolkien was a linguistics professor, and these came from actual grammatical and orthographic rules within his over half a dozen complete invented languages, and so served a real purpose.